The Endurance of Love

The Endurance of Love

“For a long time, I thought I was born into a mythology instead of a family.” – Pat Conroy 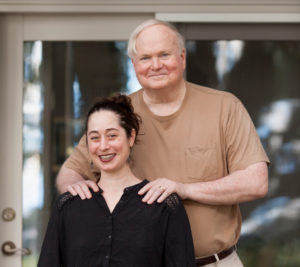 For a long time, I thought I was born into a family, instead of a living mythology.

Pat Conroy was my father’s best friend. He was always a teacher at heart and an imp by nature. He was with me, influencing me, holding me up, challenging me, pissing me off, inspiring me, helping me, disappointing me, making me laugh, and quick to tell me how it’s done (at least his way), and instructing me how it’s not done “kid,” at pretty much each formative transition of my life: birth (mine), childhood, adolescence, career changes, marriage, and, of course, death (his). It is no wonder I find it challenging to answer prompts like, “How did Pat influence you most?” or “What is your strongest memory of Pat?” Pat is as natural a part of my life as my fingernails—and sometimes as ratty. He is an extension of my family fabric. That remains true after his death.

For a long time, until I started publishing my own fiction, until I dipped a few aspirational digits into the world that he has lived in so long, I took the tightness of that weave for granted. I was, at the time, unable to answer prompts like the above. I am not sorry for that. I am happy for that. I didn’t reflect on Pat as “Pat Conroy.” Or his family. He and they were as fucked up and exquisitely a part of my life as my blood relations were. That, though, I don’t think is enough to make my experience of him unique. Rather, that is the aspect of the experience of Pat we all share: that majestic and precious intimacy he welcomed, and though sometimes that was for better or for worse, at all times he is a great teacher of our accountability to love and being responsible to and for one’s own art. I could not be more grateful for that.

The Pat who occupies my earlier recollections is the Pat who came over nearly everyday to our house in Atlanta, in the same grey sweatpants with a hole in the left rear and drank bourbon and Coke-a-cola with my father in the living room, paid me a nickel to either put on a dance show or get the hell out — depending on whether or not he and Bernie were bored with each other that day — and who punctuated my afternoons after school with the sounds of his trademark “Are you fucking kidding me!” followed by, “Well, Gaahaadayamn!”

In addition to acclimating me to the subtleties of rhythmic, harmonic, and distinctively southern cursing (of which, the sticklers be damned. If Pat Conroy thought “you’re fucking shittin’ me!*” was the was the most effective and poetic arrow to a communicative target, then I dare them to argue. I’m pretty sure I learned at least 1/3 of my language sensibilities from the cursing exchanges between my father and Pat), he also taught me to tie my shoes.

At that age, shoe-tying is, as we know, quite the rite of passage and the call of freedom—not just for the child, but for the crouching, cursing adults who can’t get on with their days until they supplicate themselves to the toddler’s feet. I, however, was an obstinate, disrespectful, screwball of a learner. Whether I chose not to learn from my family to keep them in servitude to my shoes or I just couldn’t learn to tie them, I don’t remember.

In response to my family’s well-earned exasperation, Pat announced one day, “Gaahaadayamit, Schein, I’ll teach her to tie her goddamn shoes!” He dragged me into my father’s writing studio, shutting the glass doors behind him. He took one shoelace, laid it out to one side, took the other, laid it out opposite. He gave each of the shoelaces names, and said that they wanted to be friends. He put the left over the right so they touched. He explained that they just met and asked me if that were enough to be good friends. I shook my head. “Why not?” he asked. He threw them apart and said, “cause there’s nothing holding them together, right?” And so he looped the one under the other and pulled. He asked again, “And now?” I wasn’t sure. He said, “Okay, so maybe they need to do things together?” And he talked me through the adventure that took each one around the other until they were bound together as best friends forever — that seemed about right, since he had had tied a double knot (always in need of an editor, was he), just to annoy my big sister, who he knew would then have to teach me how to untie a double knot. I wish I remembered the adventures of left-string and right-string, but I was too proud at that moment to pay attention to silly stories about whatever-their-names were. I could tie my shoes!

He was never my formal writing instructor. I took no lessons or critiques from him, but he helped construct the grammar of my learning, inspiration, of my understanding of love and friendship, and my inability to escape story. And, he taught me about the responsibility to that—to love and to story—by failures as well as successes.

On Authoring, not Writing:

As an adult, trying to get published, I was as stubborn as a child learning to tie my shoes. I was frustrated with the industry, with editors, with quite, frankly doing anything I didn’t want to do. I complained with hidden-fist angst to Pat about what one “had” to do – Press kits? Interviews? Signings in the August heat that no one comes to? Presentations one pays for oneself? I just wanted to write!

I will say that rant lasted as long as it took Pat’s metaphorical hand to spank the living daylights out of me. He said, “You love to write? You want anyone to read it? Then you just asked your best friend to jump off a cliff with you, your baby, and his baby. If you don’t understand that as an author you are responsible for the relationships you’ve just created, then you should abort your own book and jump off a cliff by yourself.” And it was with his relentless philosophy of responsibility to love (not necessarily of individual people but of the fact of them) that he taught me to grow the hell up as an author. And so I learned of the gloriously gracious, self-less, secret, and extra-ordinarily draining commitment he gave back to his readers, to bookstores, to publishers, and to editors.

For one example, he never left a signing line (no matter how many hours long), no matter if he had to pee, and he never left an open hand un-shaken. I know this. I was severely scolded by him for doing so myself on my first engagement when I went for a pee break. He would, without complaint, with only a Diet Coke for company, routinely sit in the back of warehouses signing thousands and thousands of books. Why did he do these things? He didn’t respond with, “to sell more books.” He didn’t say, “because I am supposed to” or “because it is strategic.” He said, “Because I love them, Kid.” And so he taught me how unselfish being a loving author is. It is not the same as just being a good writer. It is a commitment on and off the pages; it is a commitment to where the words go.

On Living and Dying Great Love:

During the hushed-but-well known hiatus-of-friendship between Pat and my father, my gut fell concave. Mind you, both of them are serious pains in the assess and both can be downright Silver-Back chest-thumping knuckleheads (Bernie and he would make a joke here about compensating, but I’ll leave that to your imagination), but I was 18, living in NY, mostly alone. And I wondered, who do I have who knows me now other than my parents and my sister? At that time, because my own trajectory had been vastly different from friends I’d grown up with, I had only my new roommate and my two cats. I could not help but recall those afternoons in Atlanta when I had hidden behind the sofa, listening to Pat and Bernie talk about their youth over and over with itching repetition. And I thought, “What in the name of God is wrong with these two idiots! After 30-odd years of friendship, years that can never, ever be recreated, years that were melded from broken moments made whole, from years anticipated that fractured into even more years, from brilliant moments never expected, and from accomplishments only shared in whispers of secret anticipation, they refuse to speak to each other for reasons neither one can remember?” And I did ask them both at that time, and neither one remembered. “What the fuck is wrong with these two?”

They had taught me friendship. I’d grown up seeing their legendary friendship in live action. And damn them to hell if they were going to betray that. Damn if they were going tell me that wasn’t really possible. That story had only one possible ending if the grammar of the world they gave me were to create coherency.
And hell if they didn’t end up proving my fear a completely unfounded adolescent panic–a lack of faith in the solidity of proper narrative harmonies, discords, and resolutions.

At Pat’s death, as his face and body finally were able to relieve themselves into their innocence, and while the rest of us were in whole-body contortions of pain, Bernie, who hadn’t wanted to leave Pat’s side, held it together for a few seconds. And then he, too, crumpled over Pat’s newly pain-free face; he brushed his infamous and half-century old comb-over, palmed his cheeks, kissed his forehead, and looked at him as if no one else was there and whispered, “I love you, Bubba. I love you, Pat. I will always love you. Your heart is my heart. It will always be my heart.” It was not great literature. I’m sure Pat would want it re-written, and I’m sure Bernie will re-write it. But, unadorned and abandoned by the Guard of Decorative Words, in that raw split-second, against the ripples of the creek lapping up the last of the crimson sun, appeared the two fifteen year old boys right at the beginning of their adventures together. Great love, indeed.

They kept true to their lesson of friendship and the endurance of love.

Pat was there at my birth; I was there at his death. That man involved me in part of one miraculous, beautiful, reverent and irreverent, sloppy-ass knot that I can never undo.

*In gleeful rebellion against one his few explicit writing instructions to me: “I hate exclamation points! Never use them!”, I have included exclamations points where I deemed necessary. Ironically, they are almost exclusively in relation to his direct quotes.

© Maggie Schein, 2016 Not to be distributed or copied without the author’s permission.